I'm sure that headline's been done.

It makes a certain grotesque sense that the year that crushed the world into smoldering shambles was about the best one on record for me. New job that I love, changes in my life to the good, thinking about buying a house in the not-too-distant future. I was in the worst spot I've ever been in by a long shot in 2015, and though I haven't entirely clawed my way out of the hole, it's gotten a little less steep at the top.

While that's been happening, I've been back to my old, circumspect self but for new and better circumspect reasons. I can't get into them a the moment. That's what that means. Consequently, this blog stopped along with my book, which was the really thin excuse I gave for starting it. I think I'll still run it when I get back to finishing the book -- and at the moment, I really think I will -- but I don't think this post fits onto that continuum.

I was talking recently about how the fury had gone out of me -- much of which animated things I wrote in the past -- only because things are better for me. For a while there it chastened some of my contempt for people in general and made me realize how much better it gets when you get out more. Live a little.

Then we elected fucking Trump.

When that happened, I'd been working in Canada for the week, completing a couple of projects and helping train a local Canadian. I submitted my absentee ballot a couple weeks before and crossed out of the country without even the vaguest premonition that I'd be coming back to, as that Canadian trainee aptly put it in an icy predawn parking lot, a smoking hole in the ground.

The reports you may have heard of people abroad not really getting the Trump phenomenon are all true. Folks I would only ever know for one day were very careful with me, but their curiosity was undeniable in that polite, tactful Canadian way, complete with the "eh?" (BTW: pretty sure they only do that to entertain dumbass Americans anymore.) They wanted to confirm it was nuts, pretty crazy. They were watching me to see if maybe I was one of these weird animals that liked chewing tobacco and rust bucket Chevys with 33 inch lift kits in disguise. They intoned it all as if it were obvious I wasn't, that that couldn't exist, that nobody really wanted what had happened... that it was an accident of hubris and sense of humor gone wrong, like Brexit.

I can identify. I grew up in a place where that was not only strange, but low-brow. Why would anybody leave a rusted-out shell of a '67 Chevy up on blocks on their front lawn? Why would anybody wear a trucker hat, let alone a fucking red one? Why would anybody talk like that? I came up so doe-eyed and insulated in a part of the country people fled to from those parts of the country that it wasn't strange to me to see people of color teaching my classes, being police officers, being on my sports teams. I even knew kids fresh off the boat. People were people, accents and weird tastes in food notwithstanding.

I guess all of this is a roundabout way of saying I don't get it either. I was born here, I'm white, I have struggled my ass off my entire working life and it never occurred to me to blame immigrants or welfare recipients or, (for the love of Christ, he said ironically) JEWS. What the fuck people? In my mind, it was always because I was a shitty student who blew out a hamstring at an inopportune moment, nixing any shot at a scholarship which would have been the only reason I would ever have chosen to go to college. That's why I struggled... that and a terribly bad sense of where to go for work. I've talked about that.

So for once, finally, I've gotten lucky and fallen into something that pays a living wage and seems fairly stable. I still work hard, like I always have. I try to work smart, too. It is from that comfortable vantage point that I can look at what's just happened to this country and say my contempt for fat, lazy Americans has been justified all along. When Obama got elected, I was really willing to believe it had been me all along, projecting my frustration onto the culture around me, watching the unforgivably stupid prosper and the sensible be smacked down over and over for prejudices that rationalized that fat laziness. I'd have never believed he could get elected and re-elected with all these morons clutching a ballot. I still can't quite reconcile how he did except to wonder at his skill as an orator -- man is he good at that. He figures, with a 56% approval rating, to hand the baton to a man who campaigned on and now is assembling a cabinet with values that directly oppose every one of his. And not just in a liberal-vs-conservative way. Much more in a think-vs-scream-and-plunder way.

CNN, ABC and NBC are now thought of by large swaths of Americans as fake news, while the pres-elect has begun to sign deals with right-leaning media organizations (NOT FoxNews, by the way, but they'll come around I'm sure), to get his messaging out unfettered by fact.

I was about to go on a tirade about this, but then I remembered the left on Twitter and basically everywhere else online rolling in a mud pit of ecstasy over an admittedly Freudian-looking typo Trump tweeted yesterday: 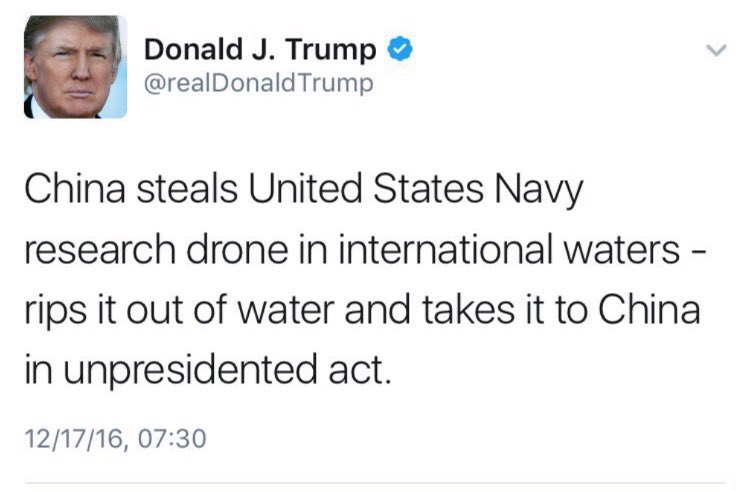 This overlooks the fact that the tweet itself has only two motivations: 1. Poking China with a stick over literally nothing (illustrated in a moment) and 2. Riling his idiot base against China.

Later, hours after China promised to give the drone back, he posted this:

Which, as he is wont to do, ignores that he posted this a couple years ago: 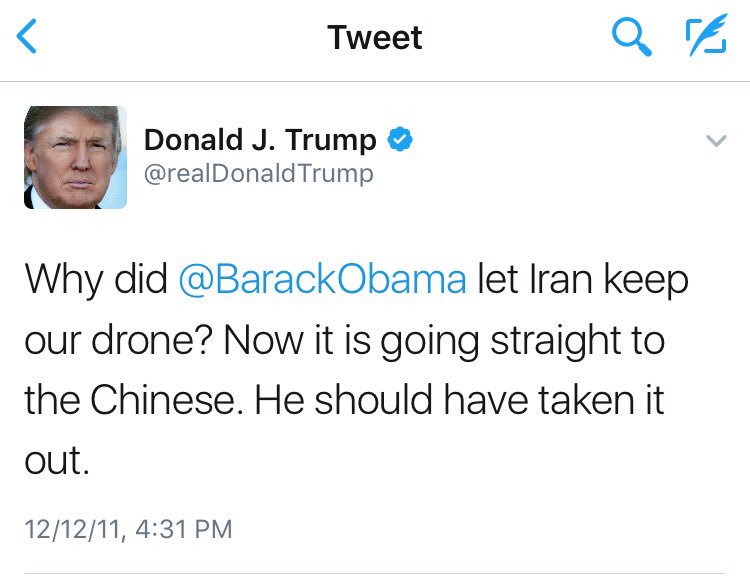 But yeah, jump all over the typo. That's constructive.

This post isn't a case against Trump. That's been made by more and better than me, and is redone and updated every single day. It's more about the contempt I suspected was unhealthy while most of my dealings were with the dregs of a dying industry. Whether contempt can ever be healthy is a question for philosophers and psychologists, but I know that one particular contempt played a large part in starting this country and has likely been instrumental in every advance it has ever made since: contempt for the stupid and ignorant. You don't have to be elite to hate what those have wrought on the world since thought was possible and then eschewed for easier things, like belief. You don't have to be elitist to have contempt for the willfully stupid. You only have to think. What has that cost all of us?

Barring some moonshot miracle, we're about to find out.

I keep hoping I'll have more time to write, maybe because I'd rather air things like this here than on the few people in my life willing to tolerate me. And I really do want to finish that book, regardless of whether another human being ever reads it. I want to read it. What's easily lost in a year that has shot by doing work and a few other things I love is that I'm this easily bought, which opens me up to my own contempt for my fellow man. Like I said at the open, fury at what I saw in the world wouldn't let me remain silent, but now even I am dumbstruck.

For a long time, writing was the only worthwhile undertaking in my life. No longer true. Might never be true again. A big part of me hopes not -- I was fucking miserable.

I doubt I'll be dumbstruck for long though. For some reason, this page pulls at me. Nags me. You wouldn't know it from a year of more or less empty of posts, but it's true. I think about this and my book all the time. They're my only ghosts.

But being an American, it would seem, means also having a demon. Need to work on that.
Posted by Rocci Doria at 12:55 PM No comments: