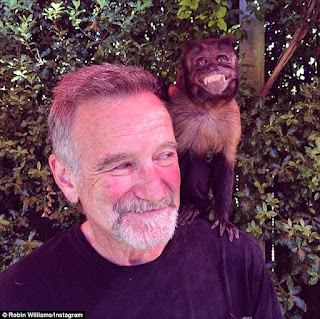 I've always envied various forms of genius, even though I know it tends to ride shotgun with tenuous mental health. We even used to celebrate that. Now we know a little better -- we don't usually goad people we know are swinging manic, and we don't generally smack people drowning in depression and tell them to man up anymore. We try to get them help. Sometimes they get it themselves. Sometimes, it even takes.

Most people that remember any part of the past millennium (which is still, thankfully, most people) know about Robin Williams and his demons.  He got help and he beat them back for a long time. We thought he was okay. This is where we go wrong -- we can't ever know that. Bipolar, depression, addiction, OCD and any number of other common disorders are more or less permanent. They can be managed but never really cured. If we ever needed proof of this, consider a man whose entire existence was wrapped up in bringing people joy and who did it in ways no one even dares imitate. They're saying that husband and father of three took his own life last night.

We've lost some good ones in the last couple of years, many far too young. I won't get into listing them here but you can't have missed it -- particularly James Gandolfini and Philip Seymour Hoffman. For some reason, though, this one affects me so deeply I'm writing this post just to work it out. Thanks for indulging me.

A million tributes flooded my Twitter timeline, alongside images of cops using excessive force against a crowd infuriated by cops using excessive force, shit blowing up all over the Middle East as per usual and a couple of soldiers somewhere in Ukraine propping up hunks of a downed commercial airliner for a roadblock. That's not cherry-picked; it's just a glimmer of current events. It's also why we need these people, not to escape over and over into a comic or adventurous or unreasonably bright version of the world around us, but just so we know we can.

I'll confess I started this post last night, and I went a little darker here. Hey, I was already tired when I got the news. I just want to offer two things:

If I sound a little heated, I guess it's because "I don't get it" is Reality-TV-Watcher for "I would never do that." It's sloppy thought. Robin Williams was no fucking Kardashian. We knew him for all the reasons we shouldn't know them.

I can't imagine what it would mean to have such prodigious talent, but for whatever reason, all signs point to "It's pretty hard." So let's focus a little more on what he gave us; none of us know what we would do if we were him.
Posted by Rocci Doria at 5:47 PM No comments:

...listed on Goodreads here. Thanks to them and all of the participants; this was fun.

The winners' geography was interesting, too. Two copies went to boxes in the same Washington post office, and one to Louisiana, one to Canada, and one all the way to Germany.

The Germans are winning everything these days.

Anyway, I found out I'm piss-poor at signing books. Calling my scrawl chicken-scratch is an insult to our favorite feathered food -- it's been so long since I took a handwritten note longer than a phone number that I actually had to practice before I destroyed all of my promo copies. There used to be a distinction between my upper- and lower-case K, for example, but I no longer know what it was.

Karen, you have my apologies.

I also found out that my habit of hovering the shift key and accidentally capitalizing things quasi-randomly (I seem to want to do this for emphasis sometimes) translates just fine to pen and paper. I signed one extra copy for the intrepid young lady at the UPS store that helped me get these into the post because she was a godsend and I'm a shameless-self-promoter-in-training. I actually wrote Godsend in the inscription, which I guess is still technically correct but implies a certain theological enthusiasm I lack. Oh well. Added shock value when -- if -- she makes it through dinner with Jove.

Speaking of shock value, feedback from friends and family is starting to trickle in. Most of it's been positive in a startled sort of way, which, when you think about it, is a pretty cool reaction to get. It's honest. Abject horror and / or revulsion would be too, and though it isn't exactly that I look forward to that, sooner or later it's coming. I'm a little (okay morbidly) fascinated to see what it looks and sounds like.

Thanks one more time to Goodreads and all of the participants in the drawing. It's good to know there are still so many readers out there, and even better to know so many are looking for something new.
Posted by Rocci Doria at 4:49 PM No comments: